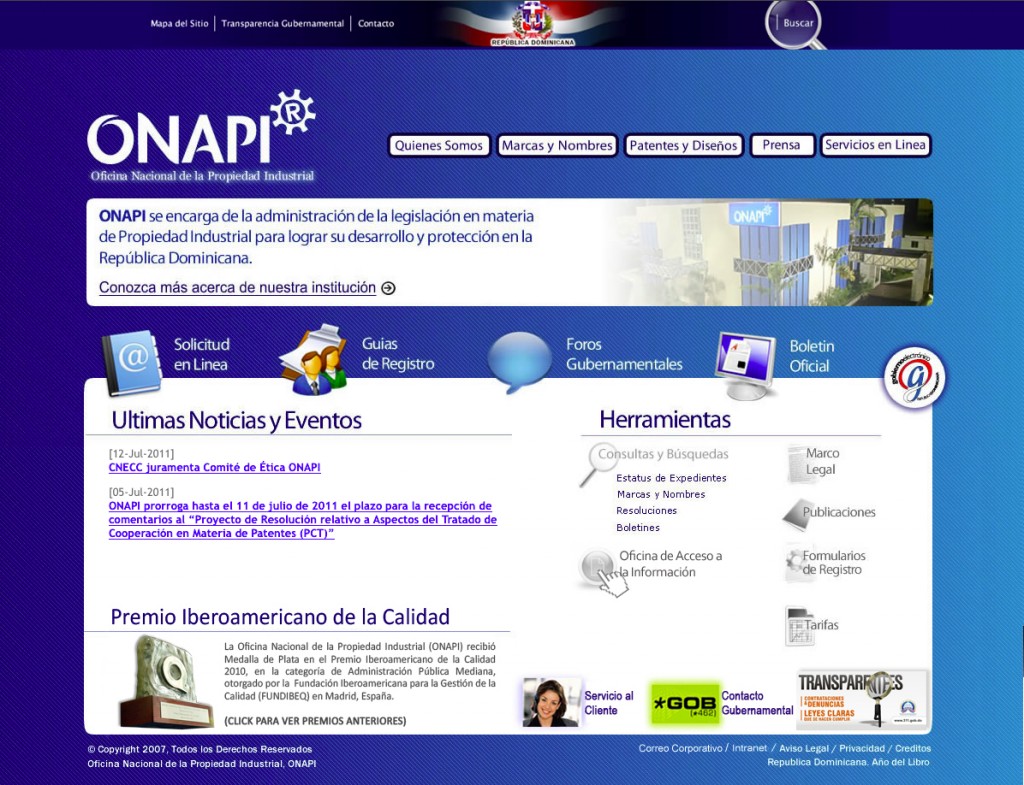 Onapi is the National Patent and Intellectual Property Registration Office of the D.R. We created the first version of Onapi Virtual in 2005 and the second version in 2007. The success of this portal was such that more than 45% of the registrations are now performed online and take less than 20 days to process. This means that companies can incorporate 60 days faster as a direct result of our efforts. Onapi went to went the Presidential Medal of Quality twice and the site was nominated for a Golden @ and exhibited to Latin America and the world via online showcases.

The volume of information managed by this site on a daily basis, the social good it brings and the amazing managerial work performed by senior and mid-level leadership make this project a national pride. Since then, the media has heavily reported on the launch and the merits of this website. Not only can Dominican register their intellectual property online, but now international constituents, like managers of Fortune 500 firms or multinational companies can register or query the registration of their company’s intellectual property in the Dominican Nation. The site is compliant with W3C, OPTIC and WIPO guidelines.

Onapi’s website is a production of major significance in the history of the Dominican Republic. It is the only website that every other nation must access in order to legally conduct business in the region. Onapi Virtual is the most intenational of all national government websites and is indeed one of the most sophisticated.

To put things into perspective, Onapi Virtual houses all the patents, logos, company incorporations, trademarks, and name registrations ever issued by the national government.

Our work in this project had multiple stages and included the creation of the institutional CMS, the web design of the whole interface, the database connection to legacy systems, online forums, online request forms, departamental websites, transparency forum, web statistics engine and e-government systems implementation as required by law.
The complexity of this project was only shadowed by its great success and the positive impact that it had in the Dominican Nation. The merits of the website were chronicled by the media in many articles and also by the President himself when delivering the National Medal of Quality to Onapi.

Creating this project had another major impact in the lives of Information Providers’ staff. Now we were the creators of the top entertainment, commercial and governmental websites of the country. It was at this point whre we realised that, as developers, we could become more than simple technicians. We realised we could become a key part of the social fabric of our nation.

Designers, developers and producers that lift culture, business and government for the betterment of nations.

In this context, the impact of our work was clear, we were no longer building pages but crafting a better future for our country by identyfing the most critical projects and tools we could build.

Onapi is a clear example of the key task of every designer: choosing the next project wisely can maximize our societal impact and makes us more relevant in the long term.