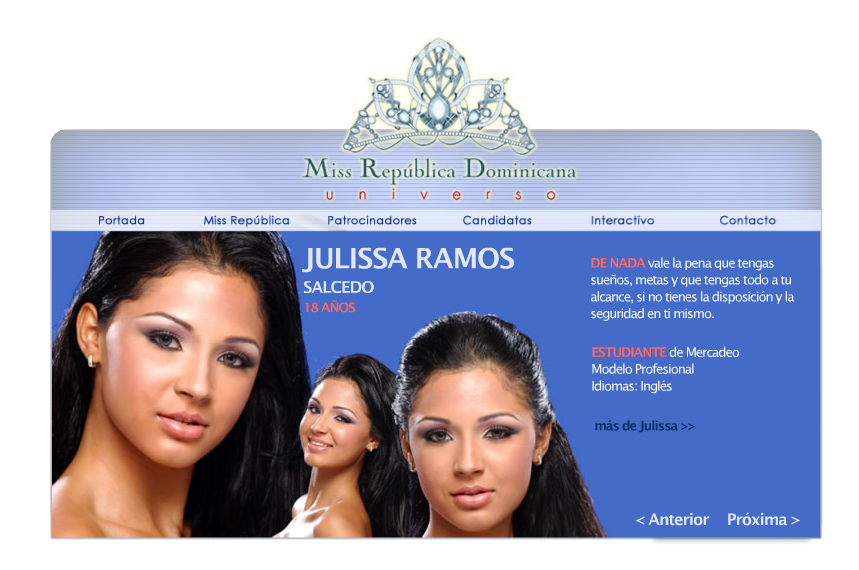 When Jordhy Ledesma took the Miss Dominican Republic Universe project as both web producer and corporate sponsor he wasn’t sure what to expect. From March 2004 to  2007  we worked with the Miss Universe Organization in Santo Domingo to produce some of the most engaging web properties of the Latin American Internet.

We didn’t know what to expect with the construction of a new website for the pageant. Information Providers created a website and magazine for Miss Universe Dominican Republic and we had more than 4,000,000 visitors from over 40 countries in only one month. We never expected those numbers, not in our wildest dreams.
Alan Genao, Partner, G&P Marketing

As one of our prominent clients at Information Providers, The Miss Universe Organization in Dominican Republic received our consulting, product development, publishing services as well as corporate sponsorship for three years. During this time-frame we created engaging portals and magazines and help drive over 3 million unique visitors to its online properties. Our work included consulting, magazine design, art revision, web production, digital media consulting and web development.

About Miss Universe
Miss Universe is an annual international beauty contest that is run by the Miss Universe Organization. Along with the Miss Earth and Miss World contests, Miss Universe is one of the three largest beauty pageants in the world in terms of the number of national-level competitions to participate in the world finals. The contest was founded in 1952 by California clothing company Pacific Mills. The pageant became part of Kayser-Roth and then Gulf+Western Industries, before being acquired by Donald Trump in 1996. The pageant is broadcast on NBC, simulcast in Spanish on Telemundo and webcast on Xbox Live. Alongside its rival Miss World and Miss Earth, this pageant is the most publicised and most awaited beauty contest in the world.